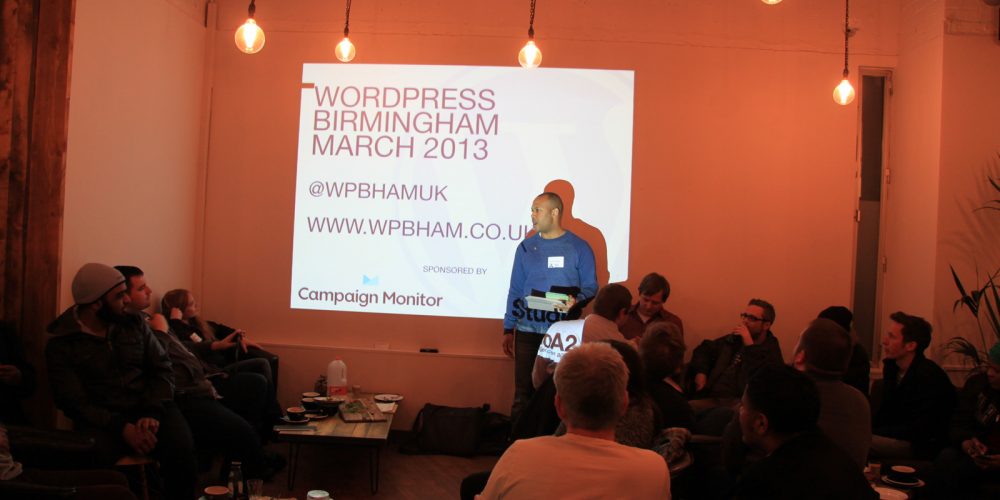 Being a self taught developer, I found it hard to meet other developers and designers. Being sat at home, with a book, and a print out of an online tutorial it is hard to imagine who exactly produces this kind of information.

The first chance I had of meeting a developer who I did not know was at WordPress Birmingham in the winter of 2011. At the time WordPress was something I was just getting involved in. In a pub called The Old Joint Stock in the center of Birmingham, I met three other developers who all worked with WordPress. After feeling a little awkward (being the noobie and all) I realised that these three lovely chaps were happy to help me. They told me about their background in web development, and gave me some useful tips in learning about how to develop WordPress websites.

Looking back, if I hadn’t have gone to that WordPress Birmingham meet on a cold winters evening in 2011, I probably wouldn’t be working in the web industry now.

A good few years on, and I have worked as a developer for a Flipstorm, then as a freelance developer mainly for Smartwave and now as a Project Manager for Studio A2. Since then I haven’t really had much opportunity, and truth be told I’ve dispensed no effort in attending any more WordPress meets.

That all changed in February, when I decided to attend WordPress Birmingham again.

The location had changed, it was now in a cool bakery around the corner from the Old Joint Stock, and I was a little unsure as to what to expect. Within about an hour of arriving I think I was still a little shell shocked. From four of us sitting around a wooden table, drinking pints of ale and talking about the WordPress loop, WordPress Birmingham had now grown into an event which was attended by a hive of busy developers and designers who all work with WordPress, and a shed load of WordPress users who knew absolutely nothing about development, but who just loved running their projects or websites on WordPress.

We had some excellent talks and presentations, all just fifteen to twenty minutes in length, but provided an excellent basis for learning more. For instance we had a talk by a local developer called Jonny Allbut who discussed the use of WordPress Frameworks. This is something a month later I am still researching.

Putting aside the excellent talks, and the open and frank discussions I had with users, I found the opportunity of meeting developers and designers who work with WordPress, day in – day out a real boost. Sometimes working alone means that you feel like the only developer in the world, but meeting people who do the same work as you, and struggle with the same issues as you gives you a feeling of camaraderie.

Last week I went to the March meet, and the quality of WordPress Birmingham only improved. The attendance was around forty, and there were lots of new visitors. The talks were on subjects such as child themes and creating plugins – topics that I feel you just need to learn from someone who has the experience behind them.

I personally can’t wait for next months WordPress Birmingham meet up, and I would highly recommend anyone that wants to get involved with WordPress, any developers or designers whose projects are built on WordPress, or anyone looking for a new content management system.

Code Addicts is a trading name of Insight Technology Group Ltd.
Registered in England and Wales No 11278550